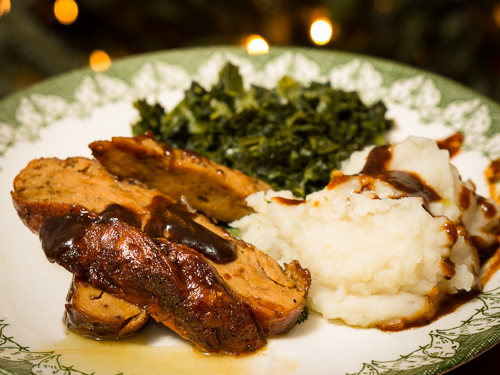 After spending several holidays trying out different versions of premade “roasts,” we decided last year to try our hand at making vegan ham. After a few trials and tribulations, we found the best method and flavor profile to remind you of the brown sugar and pineapple-crusted ham of your childhood. (Minus the atrocious cruelty and all that.) The majority of this roast will be cooked in your slow cooker, and it will also spend a little quality time in the oven to allow that sweet glaze the opportunity to create a candied rind.

Directions:
1. Spray/grease your slow cooker and turn it on low.
2. In a bowl, mix together wheat gluten, nutritional yeast, black pepper, onion powder, paprika, and cloves.
3. Add pineapple juice, soy sauce, liquid smoke, maple syrup, and water. Mix and knead for 2 minutes. The mixture should be slightly damp and sticky.
4. Form two round loaves and place in slow cooker (if you try just one big ol’ roast it probably won’t set correctly). Pour vegetable stock over and cook it on low for two hours and then cook it on high for three hours.
5. Once your “ham” has cooked, place the loaves in a greased casserole dish. “Score” the ham (just make not-to-deep slices into the roast) and preheat the oven to 400 degrees. In a small bowl, mix together the brown sugar, mustard, pineapple juice, melted vegan butter, and molasses. Pour this glaze over your roasts and stick in the oven for an additional 15-20 minutes.
6. Let it sit for 15 minutes and then enjoy the heck out of it, hot or cold!

Cooking Shortcut
If you’re short on time, you can try this shortcut, compliments of Julie Sechrist, Generation Veggie’s food photographer:

1. Follow original recipe until crockpot directions.
2. After dough is separated into two pieces, roll each into log shape. Place each in a piece of foil and roll up, twisting the ends (like a candy).
3. Set up large pot with water and place steamer basket on top. Place foil logs into the steamer basket cover, and steam for 40 minutes.
4. Cool for 5-10 minutes, unwrap, place in greased casserole or a bread pan (which might work better to hold the shape).
5. Cover with half of baste, bake for 20 minutes.
6. Flip roast, cover with rest of the baste, and bake for 20 more minutes (I left it under the broiler for 5-10 extra minutes to give the outside some texture). 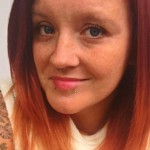 Amanda is the managing editor for a website design and development agency and a graduate of Notre Dame College. She’s been vegan for nearly a decade and enjoys making cruelty-free sweets and easy, delicious dinners. When she’s not concocting something in the kitchen, she can be found hanging out with her vegan hubby, daughter and toddle, coaching a feisty group of softball players, and blogging at Chubby Vegan Mom.