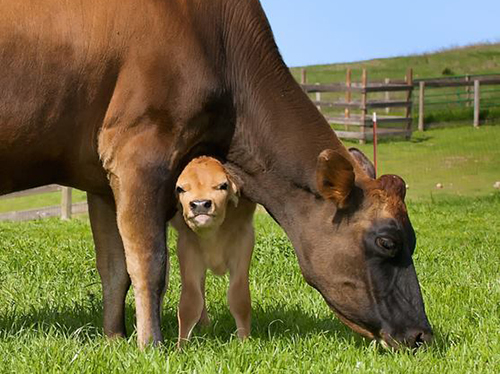 Just like all moms, cows only produce milk for one reason: to feed their babies. Since dairy cows only produce milk when they are pregnant or nursing, the dairy industry has devised a solution—every year, cows are artificially inseminated to force them to continue producing milk. Their calves are ripped away within hours or days of birth, crying with fear and anxiety from being separated. The newborns are then shipped off to be raised for beef or veal.

The average dairy cow produces 2500 gallons of milk in one year, more than double the amount produced 40 years ago. To ensure increased production, factory farms employ a number of unnatural processes, including dosing cows with bovine growth hormone (BGH). This inflames the udder, causing a painful condition known as mastitis, so that cows can produce up to four times the amount of milk they normally would to nourish their babies.

Like chickens and pigs, dairy cows suffer in debilitating conditions for their entire lives. Nearly 40 percent of cows are considered lame. They are often confined to indoor pens, under constant strain from impregnation and forced milking. The milking machines damage their udders and cause chronic pain. Investigations have found cows standing day and night in their own waste, or collapsing due to exhaustion. Rather than clean their living areas, the industry uses tail-docking for “hygiene purposes,” placing a tight rubber ring around the tail until it falls off or cutting it off without anesthetic.

A dairy cow’s life is cut brutally short by factory farming. Though their natural lifespan is 20-25 years, industry-farmed cows are killed when they are just 4-5 years old and their milk production decreases. Considered “spent,” they are usually slaughtered for pet food or low-grade hamburger meat.

As with “cruelty-free” eggs, the dairy industry has increased its efforts to market organic dairy produced by “happy” cows. But though organic milk can be free of antibiotics and synthetic hormones, the cows that produce it are still subjected to a constant cycle of impregnation and birth, and their lives are very similar to those of industrially farmed cows.

Cows bond with their herd—and of course, with their young. They are social creatures who experience happiness as well as pain and fear. Yet the relentless cruelties of the factory farming industry deny these complex animals the chance to lead natural lives.

With the increasing number of dairy alternatives, there is no excuse to subject these animals to the terrors of factory farming.