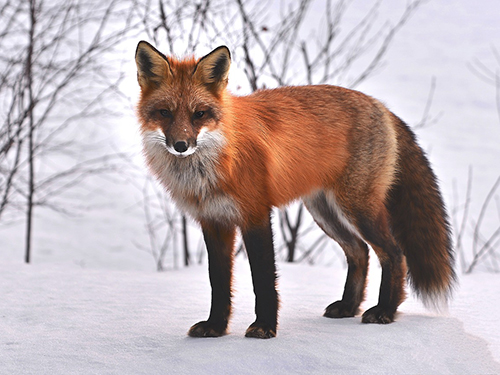 The fur industry thrives on unspeakable cruelty. Fur factories confine millions of rabbits, foxes, raccoon dogs, minks, chinchillas, and domestic cats and dogs to small, filthy cages for their short and painful lives. These animals are then brutally killed—or, worse, are skinned alive.

China supplies more than half the fur garments sold in the United States—and it has no penalties for abuse on fur farms. Animals are forced to live outside in all weather conditions, shivering in metal cages and becoming diseased. Mothers have nowhere to go while giving birth and have been seen killing their own litters.

The skinning process is horrific and grotesque. Animals are thrown on the ground and beaten before they are skinned, but many of them survive to be skinned alive. Their skin is pulled from their limbs and over their bodies as they gasp for air. The animal is then thrown into a heap of carcasses, where her heart can continue beating for up to 10 minutes.

Fur trapping is equally cruel. Steel-jaw traps, which are the most commonly used, are excruciatingly painful weapons. These traps clamp down on the limbs of raccoons, coyotes, wolves, beavers, and other creatures, often to the bone. The animal struggles until he is exhausted, becomes shocked, or dies.

Although the United States and Canada have marginally better animal welfare standards for fur farming than countries like China, our governments are not strict about complying with the rules. Every year in Canada, hundreds of thousands of baby harp seals are killed with hook-tipped clubs called “harapiks” for their beautiful spotted fur. Baby seals are totally helpless—at 3 months or younger, they have not even started eating solid foods yet. There is no way for them to fight back, and they are often still conscious while their fur is sliced away.

Every time someone purchases fur, no matter where it comes from, they perpetuate this vile industry. Check out the Humane Society’s list of fur-free brands and retailers so you can shop without supporting cruelty.