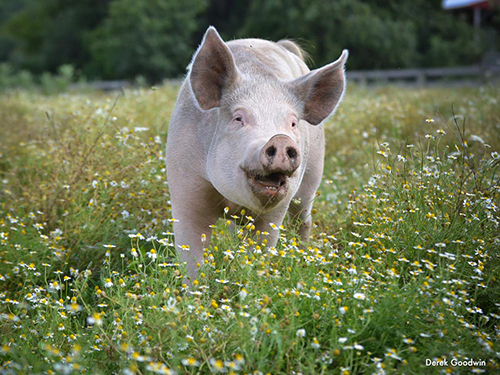 Eric lives free at Farm Sanctuary thanks to the compassionate concern of a woman and her daughter. Read his story. Photo credit: Derek Goodwin

Generation Veggie supports veganism for families because we believe animals are someones not somethings – they are individuals, not commodities intended for our use. Every year, billions of chickens, pigs, cows, turkeys, sheep, and ducks undergo abuse, mutilation, and death during their short lives on factory farms. Our web site provides an overview of these issues and resources you can share with your children. You can learn more here.

More than 9 billion chickens are killed for food each year. Most of these animals spend their short lives in total confinement, crammed in tiny cages the size of a sheet of paper or stuffed in warehouses filled with ammonia fumes. They never experience the outdoors or anything natural to them.

Chickens killed for their flesh, known as “broilers,” are highly prone to disease because of unsanitary living conditions and abnormal diets. Bred to grow large quickly, many die from organ failure, heart attacks, or other deformities before they ever reach the slaughterhouse; they are killed at only 6-7 weeks old.

What many people don’t know about chickens is that they are intelligent and social creatures whose personalities are sometimes compared to cats. Studies show that they have the ability to make conscious choices to delay gratification and have the ability to recognize “a whole object even when it is partly hidden…a capacity it was thought only humans possessed.”[1] Scientists also believe they are capable of feeling empathy.[2]

It’s fairly well-known that pigs are extremely intelligent animals, arguably even more intelligent than many dogs. Yet on factory farms, pigs used for breeding are enclosed in filthy gestation crates for the entirety of their pregnancies. Sows are impregnated at just seven-months-old and spend their stressful lives birthing and nursing in a space too small to even turn around or look at their babies.

Piglets are taken away from their mothers after only a few weeks and have their tails chopped off and their teeth snipped off with pliers. Once they reach market weight, they are trucked to a slaughterhouse. Some die on the way from overheating and exhaustion.

Both the sows and their babies endure incredible suffering in these conditions. Pigs aren’t just smart, they’re emotionally sensitive, and they experience unending anxiety and terror during their short lives on factory farms.

Like piglets, calves are taken from their mothers while still very young. They often hurt their throats from crying so intensely after being separated. But that’s only the beginning of the trauma these intelligent, loyal animals will experience.

Calves are subject to mutilations including dehorning and branding without pain relief. Because it improves meat tenderness, male calves are castrated, often with a scalpel or a clamp, which is known to cause extreme pain.

Once both pigs and cows grow to market weight—which involves fattening them with an unnatural diet—they begin the long and stressful journey to slaughterhouses, usually without food or water. Those who survive the journey are shot with a bolt gun, hung up by one leg and have their throats slit. Some remain conscious throughout this gruesome process.

Learn about cows used in the dairy industry.

Like chickens, ducks and geese raised for meat are crammed in dirty cages and sheds. They are electrocuted to “stun,” then have their throats slit and are thrown into scalding hot water to remove their feathers.

But possibly even more horrifying is the process used to create foie gras. Foie gras is made by fattening the livers of ducks or geese through force feeding. A duck or goose raised for foie gras has a tube shoved down his throat three times a day to pump the stomach with up to four pounds of grain. This swells the liver to an unnatural state, and the animal is then slaughtered for its meat.

We are all familiar with the ducks and geese who populate local waterways and fill the skies with impressive formations. On factory farms, these outgoing and athletic animals are denied everything that is natural to them, including flying and access to bodies of water. 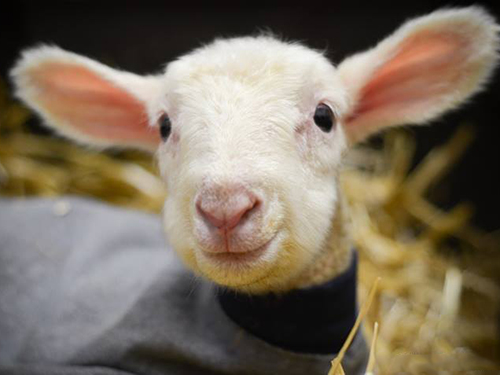 Hazelton was born soon after his mom was rescued and will grow up by her side. Photo credit: Farm Sanctuary

Sheep are friendly, social animals who wag their tails like dogs and playfully demand scratches from their human friends. A 2009 study published in the journal Animal Welfare concluded that, “sheep are able to experience emotions such as fear, anger, rage, despair, boredom, disgust, and happiness.”[3]

On farms, baby lambs have their tails cut off or forcibly rotted off with a tight ring to prevent the build-up of fecal matter on their backsides; they are not given any painkillers. Many are killed when they are just 6-8 months old because consumers prefer the taste of a lamb’s flesh over the flesh of adult sheep. During their short lives, these gentle animals are torn away from their families and physically mutilated.

Domesticated turkeys bear little resemblance to turkeys in the wild, but they are inquisitive, friendly, and even like to be petted. Three hundred million of these gentle animals die every year for their meat, and, like chickens, they have no federal protection from inhumane factory farming practices.

Turkeys are genetically bred to grow much larger than their natural weight, so that they often suffer leg pain, heart problems, and eventual crippling. They spend five to six months on factory farms packed into dark cages with tens of thousands of other birds. The turkeys are then transported to slaughter houses where they are electrocuted and killed by having their throats slit. They will be thrown into defeathering tanks filled with boiling water; those who remain conscious are boiled alive. 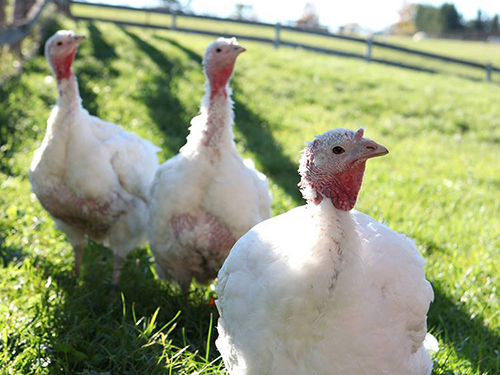 Contrary to popular belief, fish are sensitive animals who can feel pain and suffer greatly in the commercial fishing industry. Fish have been shown to have impressive long-term memories and problem-solving capabilities, but, each year, billions of these intelligent, social animals are trapped in giant nets or hooked by trawling lines that dredge the ocean depths.

Not only does fishing kill billions of fish, it decimates coral reefs and destroys rich, complex habitats and wildlife. According to the National Oceanic and Atmospheric Administration, “[M]ore than one million birds and 100,000 marine mammals die each year due to ingestion of, and entanglement in marine debris.” Dolphins and manatees are seriously injured or killed every year from getting caught in fishing lines and nets. Destructive fishing tactics include bottom trawling and using poison and explosives.

Because of pollution, fish flesh can contain high levels of methyl mercury and carcinogens, which are extremely dangerous to growing children. The best way to avoid cruelty and protect the health of our planet and loved ones is to say no to the fishing industry.

Farm animals deserve to live natural lives, breathe clean air, walk in open spaces, and socialize freely. The only way we can save the lives and end the brutal suffering of these animals is by refusing to support the use of animals for food.

[1] Hatkoff, A. The Inner World of Farm Animals, Stewart, Tabori & Chang, 2009, p. 33. Research discussed in depth by Dr. Rogers on “A Question of Balance,” an environmental radio program from Sydney, Australia.