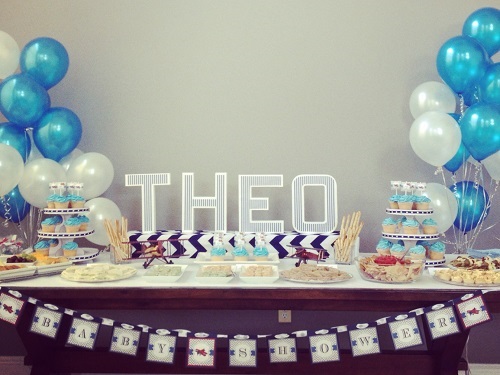 With most big milestone events, I’ve always been pretty traditional. When my husband and I were married in 2013, our wedding was the typical oak tree ceremony with roses and poems and matching bridesmaids. Our reception had a cheesy-music DJ, first dance, and cake cutting. But, all the food was vegan.

As the only vegan among my friends and family, this has always been my compassionate living advocacy angle: to show folks that veganism doesn’t have to mean anything out of their ordinary, just delicious food. So, before we welcomed our baby boy last year, my sister threw me a vegan baby shower that would have made any Pinterest crafter proud.

Our son’s nursery is airplane themed, so she followed suit with the shower decor. From the invitations to the napkins, my super creative sis made sure everything had a hint of aviation. We played some of the usual shower games, guests drank wine, and I opened gifts while we all enjoyed snacks and cupcakes. It was the perfect, textbook baby shower. I’d bet if they didn’t know me better, our guests may not have even realized that the food was vegan. Here’s what we served:

Cherry Tomato Cups
When testing out recipes, we started with just these pesto stuffed tomatoes. Once we saw how easy and tasty a stuffed cherry tomato could be, we branched out to other fillings and ended up serving little tomatoes stuffed with hummus, garlic couscous, and homemade guacamole. Get the pesto-stuffed tomato recipe from Vegangela here.

Fruit Salsa and Cinnamon Chips
At first, the sound of fruit salsa sounded kind of meh to me. I didn’t even try it until I heard nearly every guest comment on it. One guest even insisted that my sister give her the recipe right then and there. It was, surprisingly, so, so good. I mean, you can never go wrong with fruit, but I just never imagined how addictive this recipe could be paired with the cinnamon chips! Get the recipe here.

Assorted Tea Sandwiches: Cucumber, “Tuna” Salad, and “Egg” Salad
Tea sandwiches are simple, tasty, and the perfect light food for an afternoon party. We made the classic cucumber tea sandwich using Tofutti’s Better Than Cream Cheese, dill, and sliced cucumber. The “tuna” salad was purchased from a vegan restaurant here in Florida called Christopher’s Kitchen. Happy Herbivore has a great mock tuna salad recipe that would work just as well. We also filled tea sandwiches with a tofu and Vegenaise “egg” salad; try this simple tofu “egg” salad recipe. Knowing our guest list and the fact that more than one attendee was tofu-averse, I thought surely these would be the sad little sandwiches left sitting alone on the plate. I wasn’t too concerned about it though because tofu egg salad is one of my favorites, and I was seven months pregnant. I looked forward to devouring them all by myself when the party was over. Unfortunately, though there were some stragglers, not as many as I expected remained when the last guest left. This is just more proof that a little Vegenaise can make essentially anything irresistible.

Veggie Pinwheels
These are pretty much the same idea as the tea sandwiches just in a tortilla. We used this recipe as a starting point and veganized it by subbing Tofutti cream cheese for the dairy stuff and Organicville’s Herbs De Provence dressing instead of the cream-based dressing the recipes suggests. Everyone readily tried and enjoyed this option. Get the original recipe here.

Olive, Veggie, and Cheese Skewers
Take assorted olives, bell pepper slices and cubes of vegan cheese and put them on a stick and you have some party skewers! In fairness, I have to admit that I saw a lot of folks taste the cheese and then politely work around it. Oh well, we tried! There are more and more vegan cheeses available every day, so pick the one that will make you happy.

Spinach Dip
I almost always make this spinach dip when hosting non-vegans. It’s a vegan version of the Knorr vegetable mix recipe that I remember my mom making back in the ‘80s. Again, just use vegan cream cheese and mayonnaise as your substitutes. This is one vegan version of a popular classic party dish that truly doesn’t taste much, if at all, different than the original. Who doesn’t love spinach dip? We served it with tortilla chips, but you can get fancy and make a bread bowl by carving out a loaf and toasting the removed bread. In fact, this one is always such a hit that I plan on making it for my son’s upcoming ocean-themed first birthday party and calling it “Seaweed Dip.” Thanks again, Pinterest. Get the original recipe here.

Cupcakes
Instead of cake, we had vanilla cupcakes with blue-for-boy frosting. My sister used the basic cupcake and buttercream frosting recipes from Isa Chandra Moskowitz’s Vegan Cupcakes Take Over the World. Another winner.

If you’re planning a veggie baby’s shower, there’s no reason to feel pressured to serve food your guest of honor wouldn’t eat just to appease omnivorous friends and family. Of course, I’m all for offering at least a few things each of your guests can enjoy when throwing a party. Using these types of classic recipes with sneaky vegan twists makes it completely doable. Happy showering!