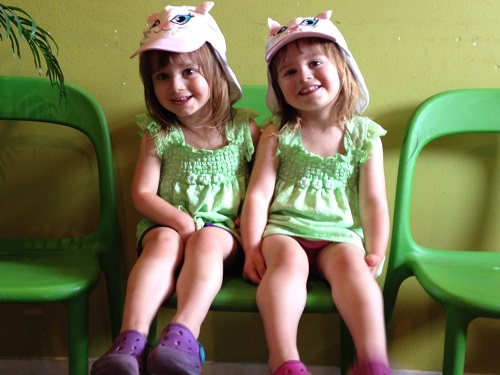 My ladies at their favorite veggie restaurant.

Last weekend, I had what will surely be just one of many vegan parenting fails. My 3-year-old, twin girls recently started attending the religious education program at a Unitarian Universalist church near us. It’s just once per week, and this was their second time in the class. While I indicated on the application that our family is vegan, I had yet to discuss it with the volunteer teachers, and I doubt they even get to see the applications. I meant to talk to the teacher before I left to return to the church service, but it was predictably chaotic with several 3- and 4-year-olds, and I decided to talk to her after class instead.

They had applesauce and Goldfish crackers for their end-of-class snack; since the girls have never seen Goldfish, they didn’t know they contain cow’s milk and ate them. I talked to the teachers after most of the other kids and parents had left, and they were very apologetic and nice about it. My girls were a little distraught that they ate cow’s milk (“but, Mama, I thought it had plant milk!”). I explained that mistakes happen, and that we’d bring some “cheesy crackers” (the Earth Balance Cheddar Squares) to eat next time. They were excited by that idea and quickly moved on to wanting to go to the playground behind the church.

It didn’t occur to me to be upset with the teachers since they couldn’t have known, but now I’m wondering how things would have played out differently if I’d gotten angry. There may be times when someone will willfully feed my girls non-vegan food, and there will definitely be times when someone will make an honest mistake. Even we adult vegans end up eating things like vegetable stew with a secret beef base from time to time (after someone assures us it’s OK to eat!). If I had gotten upset in front of my kids, I would have communicated that being vegan is difficult, serious, upsetting, and even scary. My girls may have learned that if they accidentally eat a non-vegan food, I will get angry—maybe even with them.

Since I’m raising my girls vegan to teach them to be kind, to make choices that consider the feelings and lives of others, and to know that they have the power to increase the amount of justice in the world, accidentally eating a small amount of non-vegan food doesn’t seriously concern me. Eating a few free Goldfish crackers doesn’t create more suffering, it doesn’t lead to more mother cows having their babies torn from their side, and it doesn’t make my girls not vegan enough. They were concerned to learn they had eaten food with cow’s milk because they know “cow’s milk hurts cows.” They weren’t concerned that their vegan merit badges would be revoked. And that’s exactly the response I want them to have.

This experience has, of course, taught me the importance of talking to teachers early on about our vegan lifestyle, and that lesson will serve our family well as my girls slowly enter the world of formal schooling.  However, I’m grateful for the reminder that if you want to raise a vegan family, you have to check any need for “purity” or perfection in the birthing ward. There’s no such thing as a perfect adult vegan, and there’s definitely no such thing as a perfect vegan kid. The goal of vegan parenting should be to cultivate kindness, critical thinking, and a healthy appreciation for a good, plant-based potluck. We want our kids to choose veganism for themselves rather than forcing it on them merely as a series of rules and expectations. My hope is not that they will simply become proficient in reading ingredient lists, but they will become proficient into actively caring about others.

As my girls get older, they will be able to more easily identify what is and isn’t vegan (being able to read will certainly help!) and to speak-up for themselves. They will know that I’m here to help them, not to chastise them or the other adults in their lives. Hopefully, they will choose veganism as an ethical standard for their lives, and they will see it as the privilege which allows them to be more fully in touch with their own humanity. At the very least, I want them to not see it as a burden or daunting responsibility that separates them from others and it seems like not getting upset about some Goldfish crackers is a good place to start. 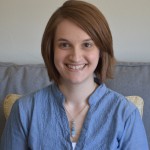