The Switch Witch & Having a Happy Vegan Halloween! 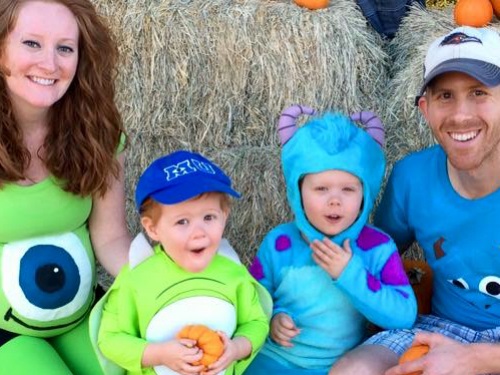 I have a love-hate relationship with Halloween. I love the idea of dressing up, but I hate the idea that the holiday is centered on candy. Growing up I was like everyone else—trying to get the most candy and eating as much as I could before getting sick. I would also sneak candy all. the. time. When I adopted a plant-based diet in the middle of my first pregnancy, I knew that I wouldn’t be able to simply mimic my childhood experiences for my children. I was excited to have a clean slate to start new traditions with my family, but it was also a little stressful because I had no idea where to start! After many hours on Pinterest and Facebook, and trying to talk out ideas with my husband while he watched football, we figured out what works best for our family—at least for now.

Thankfully, we didn’t have much to worry about for our first few Halloweens because our kids were too young to really know what was going on. We got costumes, took pictures in a pumpkin patch, and that was about it! Last year, we finally had a “traditional” Halloween. We still took our pumpkin patch pictures, but now with a 3-year-old and 1-year-old, we also went trick-or-treating through our neighborhood. The boys only lasted about two streets, but they returned with pails full of candy. My 3-year-old immediately began dumping out his pail, refilling it, and dumping again. He seemed much less interested in actually eating any of it!

We purchased organic fruit snacks to pass out to trick-or-treaters, but we didn’t anticipate so many! We actually ended up using our kids’ candy to “re-gift” to our trick-or-treaters. I was surprised by how much my 3-year-old enjoyed handing out the candy to all the kids and seeing the different costumes.

We also decided to have The Switch Witch visit, and she delivered a letter to my boys. The plan was for the Switch Witch to switch out the boys’ candy for a little present, but we had to pretend since we literally had no candy left! The next morning the boys woke up to a couple of books and hot wheels cars in their candy pails. They were way more excited about the toys than the candy. Success! We had survived Halloween without our kids focusing on and crying for candy. Plus, they talked about their costumes and the pumpkin patch for months later!

Here is the Switch Witch letter we used:

“I am the Switch Witch.
I am hungry, fierce, and fat.
I was on the hunt for candy
To feed my naughty cat.

Halloween was tons of fun.
There were costumes, tricks, and treats.
But now the Halloween fun is done
And there are lots of candy sweets.

I must admit, I dropped in while you were not looking.
‘Wait! What happened to my candy?’ you say.
Your candy was gobbled up by my fat cat.
And I leave you this little present today.”

This year will be interesting since the boys are older and more aware. They have noticed the pumpkin patches sprouting up, helped pick out their costumes, and we’ve decorated the outside of our house with a wreath and pumpkins. The Switch Witch will be visiting our house again this year. We’ve already started talking about her and reading Halloween books. We are planning to hand out miniature pretzel bags as a more budget-friendly option than the organic fruit snacks from last year. We are also participating in the Teal Pumpkin Project in support of kids with allergies, and will be passing out stickers and bubbles.

As we enter into our fifth Halloween as a vegan family with young children, I still have a love-hate relationship with the holiday. But I feel the love is growing stronger as my children embrace the costumes, decorations, and pumpkins! I am excited to participate in the Teal Pumpkin Project because it’s an opportunity to take the focus away from the candy and focus back on the fun! Hopefully it is a trend that will catch on and make this an easier holiday for children with food allergies and vegan families, too.

As we like to say down South, Happy Fall Y’all! 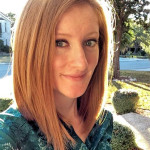 Ashley is a stay-at-home mom and household CEO. She lives with her plant-based family in San Antonio, Texas, including her husband, Tim, 4-year-old son, Jameson, 2-year-old son, Josiah, and a third son who is still on the way. Ashley is the director of and performs with San Antonio Dance Fringe, and she is also on the Board of Directors for the San Antonio Dance Umbrella. In her free time, Ashley enjoys yoga, snuggling with her four rescued animals, and Netflix.