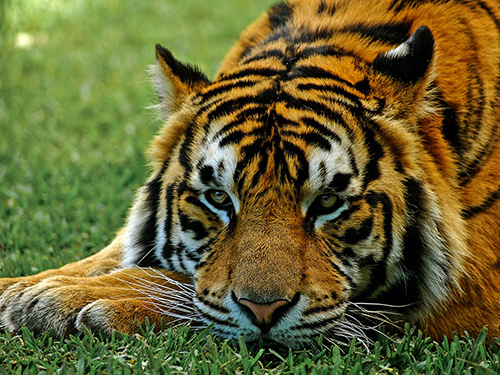 Circus animals only know deprivation, pain, and fear. Despite the myths that bears, elephants, lions, and other animals like to do tricks and enjoy close relationships with their trainers, nothing you see during a circus is natural behavior. Instead, trainers use manipulation and punishment to force captive animals to perform for entertainment.

The cruelty doesn’t end with training. Because circuses constantly travel, animals are thrust into tiny cages, trailers, and trucks in extremely hot and cold temperatures. They will sometimes go for days at a time without food or water, and the cages become filthy with their waste. Tigers and lions live in cages where they can barely turn around, and elephants are sometimes chained for days straight. Once these animals are too old to perform, they are sold to zoos and research laboratories.

Circuses aren’t just cruel to animals—they’re also unsafe for humans. Elephants and chimps have bolted from their trainers and rushed into crowds, injuring and killing children. Since 2000, there have been more than 35 incidents of elephants escaping from their trainers, running through the streets, destroying property, and attacking people.

The only humane circus is one that is completely animal free. While Cirque de Soleil is probably the most well-known animal-free circus, there are many other circuses that showcase the amazing talents of human performers and provide entertainment for families who want to teach their children kindness and compassion.